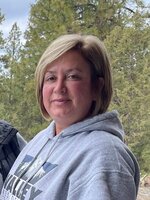 Alissa Netter, née Meeuwsen, was born on January 6, 1971 in Klamath Falls, Oregon to Daniel Edward Meeuwsen and Carol Marie Lang.  She passed away suddenly on April 28, 2022 at the age of 51.

Alissa coached a talented Canby softball team in the late 1980s, winning first-team all-state accolades as a utility infielder in 1989 and laying the framework for the Cougs’ state title run five years later — the first in any girls’ sport in school history.

Netter later became a beloved secretary at Canby High School and a fervent Cougar sports fan. Her own children, two sets of twins, went on to become athletes.

Dominic and Danielle, both in the Class of 2020, were standout wrestlers and members of the third-place Canby volleyball team in the state championship, respectively, while current seniors Zach and Theo are winding off their sports careers on the golf and baseball teams.

The Clackamas County Fairgrounds’ Main Pavillion will host a memorial service at 2 p.m. on Sunday, May 15. A large audience is expected, with overflow perhaps occurring outside. Attendees should dress appropriately for the weather.