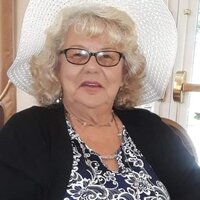 Elverna Mae Milbradt Parkins (Tootsie) was born at home on the family farm in Wadena County , Minnesota on May 6, 1945.  When she was just a toddler, Mom and Dad sold the farm, packed the 7 children they had at the time into a 32’ trailer and traveled following dam projects to North Dakota, Montana, Idaho, Oregon and Washington where Dad worked as a carpenter. The family (which had added 2 more children along the way) finally settled on an 80 acre farm in Winlock, Washington in about 1950.  Around 1962 the family moved to Molalla, Oregon where Elverna graduated from high school.  She married Fred Vest and had 2 children Laurie and Troy.  After their divorce, she married Ernie Golly and had 1 more child, Lisa.  They later divorced. She married and later divorced Don Parkins.

She was an active participant at the Molalla Adult Center.  In keeping with her caring nature, she loved being a Senior Companion which earned her many devoted friends.  She also enjoyed playing bingo at the Molalla Moose Lodge and attending functions with the Molalla Devine Divas (part of the Red Hat Society).

She was predeceased by her parents, Gust and Laura Milbradt , brothers Wayne and Earle and sister Delores.  She is survived by her children Laurie Hagaman Nutt, Troy (Liane) Vest, and Lisa (Darrin) Hanks.  Eight grandchildren: Stacy, Kristy, Eryn, Cody, Jacob, Dustin, Shaylee and Ben.  Nine great grandchildren: Matio, Avan, Kai, Wyatt, Emma, Acee Rae, Daisy Ann, Kooper and Indee.  Surviving also are her brothers Roger, Don and Gerald. Her sisters JoAnne Everhart and Beatrice Conroy and many, many nieces and nephews.  She will be very missed by her large family and many friends.

In lieu of flowers, donations can be made to th Molalla Adult Community Center in her name.