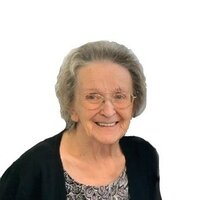 Claudia was born in Woodburn, Oregon on May 22, 1936 to Ivan and Pearl Kropf. She was one of five children raised in Molalla, Oregon where her father owned and operated Kropf Lumber Company.  Claudia attended grade school in Yoder, Oregon and later Hesston High School in Kansas where she met the love her life, Floyd. They were married on June 6, 1954 at Zion Mennonite Church in Hubbard, OR. They were blessed with four children, Douglas, Randal, Scott and Kristine. Together, Claudia and Floyd raised their children on a small farm in Molalla, Oregon.  Claudia drove bus for 91 School where Floyd served as a teacher, principal and superintendent.

Claudia was an artist with many talents. She loved to draw and paint with a variety of mediums including watercolor and oils. She learned the art of spinning and weaving in the 1970s. Claudia spun and dyed her own wool, which she loomed into beautiful textiles. Her grandchildren loved to play in what they fondly called “Grandma’s loom room” while she weaved. Claudia’s love for her family was evident. She always put her hobbies and self aside to spend time with her children and grandchildren. Claudia was an active member of Zion Mennonite Church. She enjoyed designing and piecing quilts with the ladies at Zion. Her love for the Lord was evident through her servant’s heart as well as the loving and peaceful way she lived her life. She also enjoyed spending time tending to her garden. Claudia grew vegetables and fruit but particularly enjoyed picking and arranging flowers. She was kind, quick witted and loved a good prank. Claudia was very intelligent and was always learning. She loved to read, complete crossword puzzles and was the queen of scrabble, rarely losing a game. Claudia had a sweet tooth, especially for chocolate. She loved to bake pies and brownies.  Her famous Christmas iced ambrosia punch and cinnamon twists were looked forward to by her family every year.