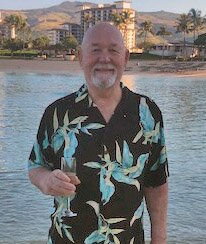 William V. Croman (Bill) of Canby, Oregon passed away peacefully on Monday, September 19, 2022, at the age of 75 following a brief battle with Acute Myeloid Leukemia. Bill’s beloved wife Vicki and their children were by his side.

Bill was born in Portland, Oregon on June 18, 1947, to William K. Croman and Patricia E. E. Venes Croman. Bill was the oldest of six children. He grew up in Linda Mar (Pacifica) California and graduated from Terra Nova High School. Bill enjoyed sports, including baseball and track (pole vaulting), and was an avid surfer.

September 19, 1966, Bill enlisted in the United States Army and severed in the 82nd Airborne stationed in Fort Bragg, North Carolina. As part of the 173rd Airborne Brigade, Bill was sent to Vietnam as a “Sky Soldiers” paratrooper from 1968-1969. On June 23, 1969, he was honorably discharged receiving the Bronze Star Medal. For the remainder of his life, he spoke fondly of his military experience and proudly serving his country.

After his honorable discharge, Bill returned home in Lake Oswego, Oregon. On his GI Bill, he began attending Portland Community College. In 1969 Bill met his future wife Vicki at a night club in Portland, OR. Every night following, they were inseparable and a brief seven months later they were married.

While living in an apartment in Lake Oswego, Bill decided to join the Plumber and Steamfitter Union, five years later he finished trade school. During this time Bill and Vicki purchased a “run down shack” of a home on the Willamette River in Aurora, OR and moved in with their first child. Few years later they added 3 additional children and filled their home with faith and love. This house was no doubt a labor of love for over the course of the years with the family growing and including four additional children by marriage, 10 beautiful grandchildren and a huge circle of friends. Many memories were made in the River House for over 45 years.

At the age of 60, Bill retired from Pipe Fitting, a very prosperous 38 years as a member of the Local 290 Plumbers and Steamfitters Union. He later began teaching future tradesmen and women for over 6 years, becoming well known for bringing in lasagna on the last night of class.

All those who crossed paths with Bill knew he was the most loving husband, father and grandfather (Papa). He had a strong faith in God and never missed an opportunity to share that love. He had so many life stories, words of advice and love for God’s various creatures, naming each one who came into his life — most recently “Scratchy” the squirrel and “Rawlly” the Rooster.

A Funeral Service will be held at St. Patrick’s Catholic Church in Canby, OR on Thursday, September 29th.

To send flowers to the family or plant a tree in memory of William Croman, please visit Tribute Store
Thursday
29
September

Share Your Memory of
William
Upload Your Memory View All Memories
Be the first to upload a memory!
Share A Memory
Send Flowers