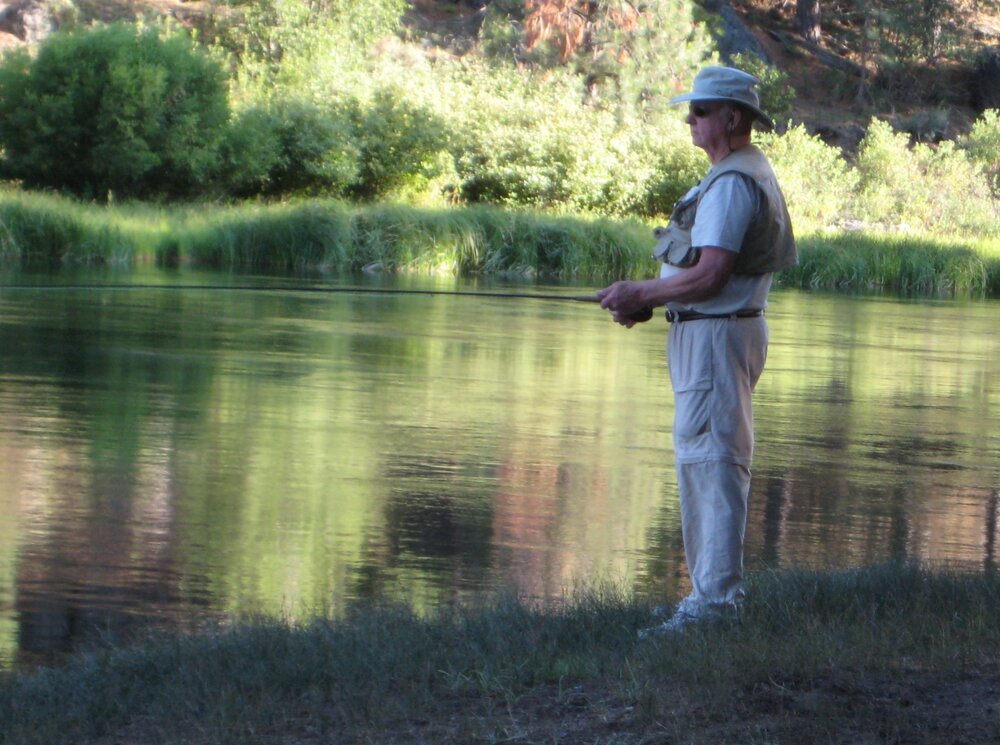 Dexter Walter of Aurora, Oregon, passed away on December 3, 2022, at his home, surrounded by his family.

Dexter was born in Minnesota to Douglas and Frances Walter.  He was the first born of his siblings: Stan (preceded), Gary (preceded), Margel (preceded), Paulette, and Julene.  Dexter had a passion for God, family, the outdoors, community, sports, gardening, fishing, fixing things, gentleman farming, and all things brick.

In his adolescence, his family, along with three other related family units, made the trek to Seattle, following the work boom of Boeing.  His relationships with his cousins continued for a lifetime. After graduating high school, he attended some college (go Huskies) and then attended a sales training program. After dabbling in the ownership of a small construction business, he began at the bottom of the ladder, sweeping warehouses at Mutual Materials brick company in Bellevue, Washington.  He quickly worked his way up and became a top salesman and manager. He was greatly admired by his colleagues, mason contractors, distributors, and architects. His excellent work ethic and loyalty to the company created many opportunities for travel, as well as the opportunity to open a one-man show as Manager/Sales in the California area. He retired after thirty-eight years of service with Mutual Materials, but not before he built his dream house-not just of any brick house, but a structural brick house.

During college, Dexter met Kathleen on a blind date set up by his long-time high school friend.  It was a match made in heaven. They were married and settled in Seattle.  Two daughters soon followed.  The family of four then moved to Portland to expand the work of Mutual Materials.  It is there that it was discovered that the daughters were horse crazy.  When the girls were young teens, Dex and Kay made the decision that a house on property would be a good move. So they purchased a 'diamond in the rough' on the seven acres which they now call home.  The original house was built in 1910 and was remodeled over time.  Once they returned from California, it was time for Dexter to build his dream home.  "The Farm" is  home to countless memories, as it has always provided a warm and hospitable embrace of family and friends, not to mention the many other creatures, from one bummer lamb to an entire flock of Katahdin sheep, countless chickens and ducks, twenty -four turkeys, many dogs and barn cats, and of course horses.

Dexter always sought education, community, and giving back.  He was involved in some kind of organization in every place he lived, holding leadership positions in many of them.  His deep commitment to service allowed him to assist in his local community, issues that were important to him and his family.  He helped lead car rallies with his Austin-Healy, taught Bible studies, acted as the president of the Pacific Northwest Katahdin Association, served as the treasurer of the Endowment Committee at this local church, and participated in many other  groups and service organizations.

'Grandpa' was one of his favorite titles.  Ten grandchildren and eleven great-grandchildren gave him the apt term of endearment.  Dexter was a sports fan.  His favorite team was always the team any grandchild was playing on!  He also sat on many hard bleachers waiting to watch a grandchild's three-minute performance of a horse event.  He was always eager to lend a helping hand to many one who needed it, while educating at the same time.  As grandchildren became adult homeowners, he often helped with remodel projects, utilizing his many years of construction knowledge.

Spending time with Dexter was an education in patience, determination, grace, and how to treat others.  He didn't have to say much to communicate these qualities, because his life was a clear and constant expression of God's love and the importance of family.

The public is invited to honor the life of Dexter Walter by gathering on December 21, 2022 at 1:00 PM at Christ Lutheran Church (15029 Second St., Aurora, Oregon). In lieu of flowers, please feel free to donate to Backpack Buddies, a community support of local child and families, about which Dexter was deeply passionate. To make a donation, please go to Christ Lutheran website (clcaurora.org) and click the Backpack Buddies and then go to Donate Now.  Please remember that the Backpack Buddies is the best option to honor Dexter Walter in lieu of flowers/tree or tribute.

To send flowers to the family or plant a tree in memory of Dexter Walter, please visit Tribute Store
Wednesday
21
December

Share Your Memory of
Dexter
Upload Your Memory View All Memories
Be the first to upload a memory!
Share A Memory
Send Flowers